Today's forecast is for south winds over 15 knots and higher in the afternoon. We get an early start around 6:00 am to avoid the higher afternoon winds. As we get further north on the lake the waves build up to 1 foot or so. Not a problem since the wind is directly on our stern. If this wind was from the west it might have been difficult rocking side to side with a mast over our deck.


We are at Malletts Bay Boat Club around noontime. The high water is going to be a problem for us to unload the boat. Normally we drive our van down to the working dock right, to our boat to unload items directly to our van. The working dock is underwater and the floating dock does not have its ramp connected to shore, so we can not load carts and wheel them up the ramp from the dock. We will have to hand carry everything we remove from the boat.


After lunch we walk over to the Champlain Marina and schedule to put the mast back up on Wednesday. We take our last Uber ride of this trip, home, to get our van. Surprisingly the Van starts right up like is was running yesterday. Only having one vehicle right now improved the odds. In the past one or both vehicles had battery issues. And this time we actually have house keys with us on the boat and don’t have to break in to our own home. Our house sitters Sam and Aubrey have bought a house just south of us and moved out a couple weeks ago. Sam has been stopping by to mow the lawn and water the plants. Its good to be home. 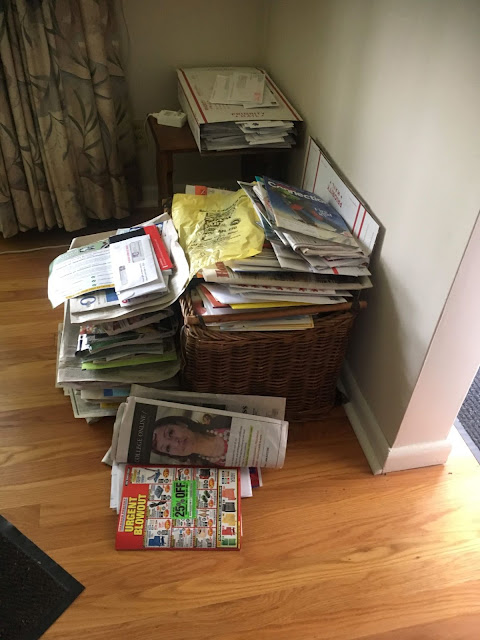 Nine months of mail, mostly junk. The important stuff was photographed and emailed to us by our house sitters.

Posted by Vermontsailor at 10:15 AM 2 comments:

Trawler “Apres Sail” leaves the wall and we quickly shove off to make the same northbound lock. We share all the locks to Whitehall.

We talk with one of the lock operators about the ground being dug up by the lock and find that they will be adding camping areas along some of the locks. He is not happy with the change, won't be as quiet, but most of the lock grounds are very pastoral and well maintained.


“Apres Sail” stops on the town wall at Whitehall and we head into Lock 12 by ourselves and lock down onto Lake Champlain. We immediately notice the trees flooded along the shore line from the high water. We spend the rest of the afternoon motoring to Westport and drop anchor where we stopped on our first night south last Fall.
I have been texting Antares and find they left Catskill Creek a few hours after us and got ahead of us the next day after Waterford and beat us back to their home port at the Lake Champlain Yacht Club at 8:30 PM

Posted by Vermontsailor at 10:14 AM No comments:

We don’t rush out in the morning. I walk over to the first lock on the Erie canal and talk with the lock operators.

When we leave around 9:00 we have a boat waiting to take our spot. We have 6 locks to do today to get us to Fort Edwards. Fort Edwards has a free town wall with power and is a favorite stop along the Champlain Canal.


We only share a couple locks with other boats, a day or two earlier it was quite busy for the lock operators for the boats backed up at Waterford. Now the remaining boats are fairly spread out along the canal. When we arrive at Fort Edwards we find only one other sailboat and two trawlers, was expecting to find the wall full. We walk to the “Anvil” for dinner, which apparently was a black smith shop some time in it’s past.


On the way back through town we discover a new Brew Pub that opened last winter and it is quite busy. Nice to see this activity in this downtown that previously always looked deserted.

Posted by Vermontsailor at 5:58 PM No comments:


We leave at 5:30 AM in an attempt to catch as much of the flood current up the river as possible. We passed Antares, Lennard and Lynnea Rossiner’s boat which they left at Catskill Creek, with the mast down, to return to home in Vermont until the locks opened.


Once on the Hudson, we are not getting the predicted boost in current we were expecting. This may be a factor of the high water issues and the accompanying run off. There is a lot a debris in the river requiring paying attention and dodging the occasional log. As we approach the town of Athens on the west shore of the Hudson and the Town of Hudson on the east shore, a northbound barge, who we popped out in front of leaving Catskill creek, on is gaining on us. Instead of sharing the main channel with him we head up the west side of the river, split by a 2 mile long island. As we pass Athens we spy Nomadic Spirit on the town free dock.

The engine seems to be vibrating excessively. I hope it is because we picked up some weeds on our prop. I put the engine in reverse and back up for a couple minutes. We continue on in forward and the abnormal vibration goes away. Our detour worked out well for us because on the AIS I could see another barge heading south on the other side of the island and it would have been rather crowded for us with the two barges passing each other.

As we approach Troy NY, we pass the local cruise ship that got pulled off it’s moorings on the Hudson in last January's ice jam and ran into a railroad bridge. Apparently the bridge is fine, the swing bridge center span is closed for a train crossing as we approach and opens shortly after.

Passing by Troy and approaching the Federal Lock we have more than 2 knots of current on our nose. We feel like we are motoring up the rapids as we approach the lock. Once we get out of the current, behind the lock, I have to back down on the throttle so we don’t surge ahead into the lock.

From the Federal lock it is a couple miles to Waterford. I have been watching the two live Webcams there to see how many boats have been leaving. For the first time we get space on the floating dock with power. In the past these docks have been full and we tied up to the cement wall further down. We are tied up right after noontime.


Around 4:00pm our friend Kathy and Keith show up and shortly after their friends from Albany Len and Walter arrive. Later we all head to McGreivey’s for dinner. 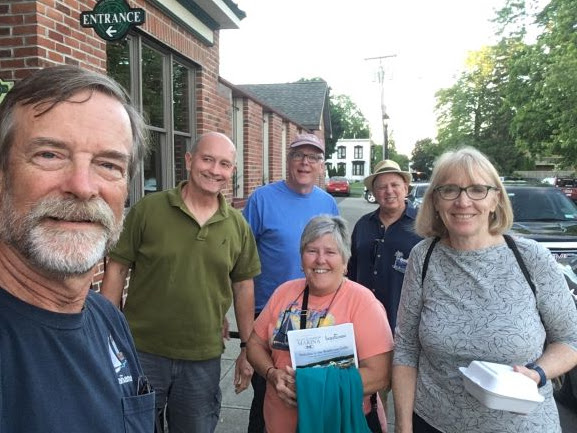 Posted by Vermontsailor at 5:57 PM No comments:


We walk in to Downtown Catskill for breakfast at “A&G Texas Weiners” and have very good omelets. After breakfast we walk the length of downtown Catskill. For all the times we have been here we have not really seen the town. Surprised the number of restaurants on main street, Mexican, Thai, Italian, Pizza, etc. 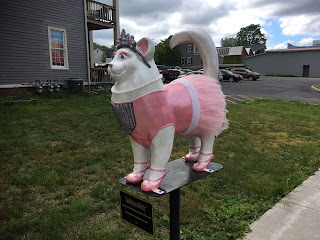 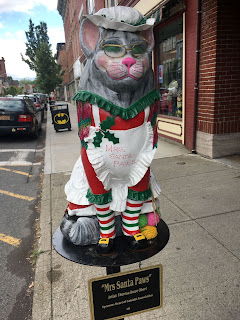 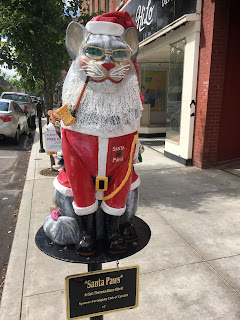 Some of the many Catskill Cats


We return to the boat and I finish strapping down the mast for an early morning departure to catch the current up the River.
Posted by Vermontsailor at 1:28 PM No comments:


We planned to get up early but in addition to our alarm, a French Canadian sailboat that pulled in beside us last night around 11:00 PM starts hammering and sawing their mast cradle around 7:00 AM. They are heading out the Erie and Oswego Canals and not waiting for the Champlain Canal to open. Since we are not in a rush we let them unstep their mast first. It takes me 2 hours to get the boat ready to take the mast down. Once the mast it down and in the cradle on the deck we move the boat to a vacant slip. We have lunch at the Creekside and later in the afternoon walk a mile to Walmart to do some food shopping and a stop by Harbor Freight for nylon straps. 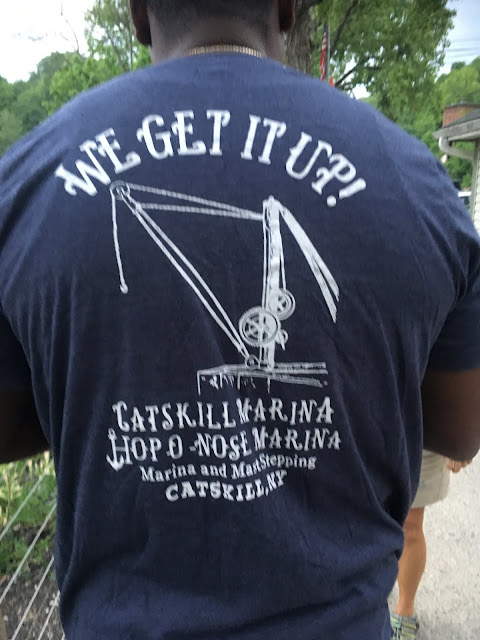 Finally we get an email announcement in the afternoon that the first 5 locks are now open and the remaining ones will soon be open. I expect the whole canal will be open by Friday. We will leave Friday morning for Waterford giving the boats ahead of us time to move on.

Posted by Vermontsailor at 1:27 PM No comments:

It is only 20 miles to Hop-o-Nose and we will not get a favorable current until around noontime so we are in no rush to leave. I head over to the Kingston Maritime Museum at 11:00 AM when it opens for a quick trip through. It becomes even quicker when a couple large, noisy school groups come to the museum. 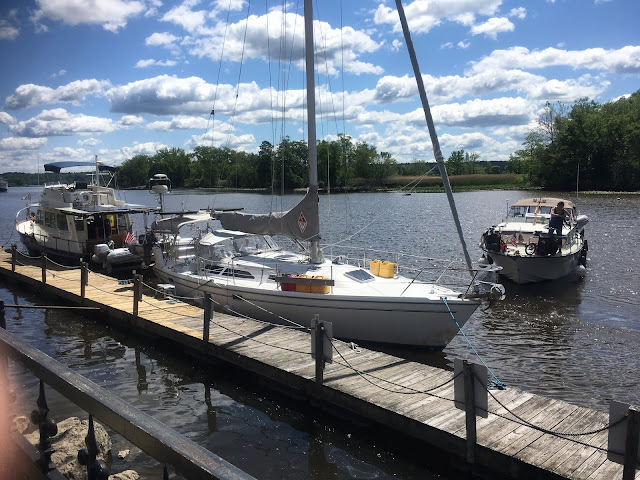 We leave just after noontime and reach Hop-o-Nose at 3:00 and pull right into the dock space under the mast crane. We quickly get the sails off and folded before it starts to rain. In my rush, I don’t do a very good job folding the sails so they will take up a little more room than normal.

I find our mast cradle that I bundled up and tied to the wall of the storage shed last fall. Happy to find it where I left it, wood stored here tends to get pilfered for new cradles.


We split a dinner of broiled seafood at the “Creekside” restaurant at Hop-o-Nose. We always enjoy eating there the food is very good.


Posted by Vermontsailor at 2:48 PM No comments: